For all the latest exciting news and announcements about our clients, and for regular showreel uploads, be sure to follow us on Twitter @showreelediting and on Facebook.

Another month of success, as we saw the much-anticipated return of two eagerly-awaited television series, the political sci-fi drama THE EXPANSE and children’s classic THE WORST WITCH, each starring clients in regular series roles.

Extremely happy to say that my television casting seminar with casting director Kristina Erdely at the Surviving Actors convention was a resounding success; tickets had sold out well in advance, and the room was packed full. Many thanks to Kristina and the audience for a fantastic seminar and an enthusiastic Q&A session…so much so that the Q&As continued well after the session had officially finished. The convention itself was the most highly-attended expo yet, with a constant footfall & long queues at the Showreel Editing stand, and it was lovely to speak with so many actors and other industry leaders.

Delighted to announce that I’ll be teaming up with top tv casting director Kristina Erdely (The Royals, Blood Drive) to give a seminar on showreels & how to get cast in TV, at the Surviving Actors acting convention in London on 4th February 2017… don’t miss out, book your tickets now! 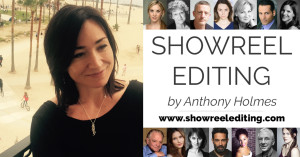 There are so many TV series being commissioned right now, so how do you get the job? How is it different to all the other castings you’ve been to? And how can you ensure you are the perfect person to do the job and walk in to an already formed cast?

November sadly saw the passing of client & multi-talented actor Andrew Sachs.   Although perhaps best known as Manuel in Fawlty Towers, Andrew also appeared in many different productions playing a wide variety of characters; from Albert Einstein in Nova, to Ramsay in Coronation Street. I edited a number of showreels for Andrew; he was a true gentleman, and a multi-talented performer, whose work has entertained millions – he will be missed. RIP.

October sadly saw the passing of client & “Dad’s Army” co-creator & comedy legend Jimmy Perry.
Otherwise, yet another month of successes from our many clients, welcoming new clients as well as happy to see many familiar faces returning for updates to their reels.
A great response from our new daily series “The Business of Acting: Showreel Tip of the Day” on social media; if you’re not yet following us on Twitter – don’t miss out! Follow us now on www.twitter.com/showreelediting

Another month of successes at Showreel Editing. As well as expanding our client base to welcome new clients both in the US and the UK, we’ve been excited to see multiple returning clients whose previous reels we’ve edited have helped them get more work – and more importantly the right type of work- it’s been fantastic to see clients increase their profile by getting fantastic roles in high-profile productions.

On top of this, we’ve been delighted to oversee the relaunch of the official website for legendary comedian Benny Hill, and brand new official social media channels for Benny Hill, featuring interesting facts about Benny, and loads of hilarious clips from The Benny Hill Show – come & join the community at www.facebook.com/bennyhillofficial and www.twitter.com/TheBennyHill!

Happy to recommend you check out @showreelediting‘s actors showreels. More at https://t.co/AVuia2ghLV

What a great month! Really excited to be working with more talent agencies, and loads of new and updated showreels for lots of happy clients, many of whom have already got new work thanks in part to their new reels!

2016 Victoria Lepper Associates Masterclass Blog: ‘How Your Showreel Can Help You Get More Work’ by Anthony Holmes

The new @VLA_talent masterclass blog is live c/o the awesome guys at @showreelediting and it’s all about #showreels https://t.co/4SHVGH3mpT

By popular demand! I’ve been asked several times recently if I have a ‘showreel of showreels’, so here it is!